The executives of the country’s largest shipping firm Hanjin Shipping Co. recently decided to return 10 percent of their annual salaries this year, while Korean Air is taking applications for voluntary redundancy in an effort to cut costs.

The country’s flagship carrier posted a net loss of more than 500 billion won ($442 million) for the third quarter of the year.

Such measures are not limited to the logistics industry.

In announcing third quarter figures on Oct. 21, POSCO said it would cut its investment budget for this year by 1.3 trillion won to 6 trillion won, and raise the cost reduction target to 1.4 trillion won from the previously set 1 trillion won.

“The largest part of cost reduction is affected by our high technological standards. Because we have the technological advantage over other global steelmakers, we are able to use relatively low-grade raw materials to produce the same amount of molten iron (as the competition),” a POSCO official said. Regarding the cut in investment budget, much of the changes were accounted for by the failed attempt to acquire the country’s largest logistics services provider Korea Express.

“The company will also delay the completion of some facilities under construction in Korea to postpone the costs, as some delay in their construction will not have an immediate effect.”

The POSCO official said, however, that the company would execute time-sensitive overseas plans such as securing raw materials at lower prices as planned. 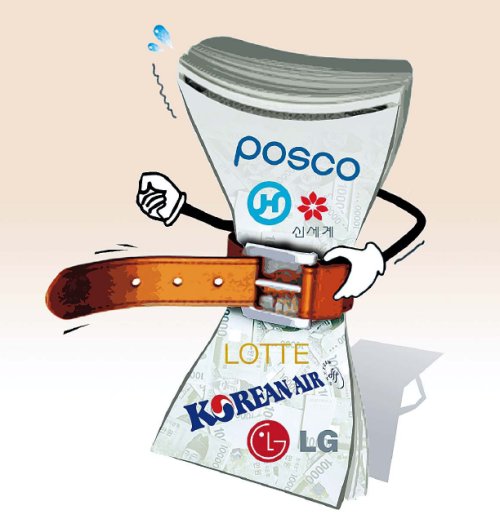 The steelmaker also has uncertain views about the coming year with industries with heavy steel consumption including the shipbuilding industry expected to be in for a slow year, while the automotive industry’s performance is expected to be maintained at levels similar to this year.

However, POSCO is not alone in taking measures to conserve capital.

Local retailers have put in place a number of means to cut spending.

Prompted by uncertain business environment as well as the pressure from the Fair Trade Commission to lower the fees placed on suppliers, Lotte Group’s retail subsidiaries have gone into emergency mode to cut spending.

The group’s retailers including Lotte Department Store and Lotte Mart are currently taking steps to minimize marketing, advertising and other expenditure.

Since Oct. 4, the companies have been operating in “slim work” mode, and aims to reduce its sales management spending, which includes marketing and advertising costs, by as much as 30 percent.

In addition, this conservative approach is expected to hold sway in the near future with think-tanks forecasting a year of strong won and slow growth.

As such, Samsung Group is reported to be drawing up plans for next year under the assumption that conditions will worsen, while LG Group has already made alterations to investment plans and introduced measures to cut costs.

LG Display has postponed plans for a 1 trillion won LCD panel plant in China, while LG Electronics has cut a number of additional payments for employees including travel expenses by about 30 percent.

Others, however, may be going against the current.

The country’s second-largest conglomerate Hyundai Motor Group, which has seen significant growth in recent years aided by the fall of global carmakers in the financial crisis of 2008, is to maintain its current course.

“The company has some cost-cutting programs (for both affiliates and suppliers) in place but no major changes in spending plans have been announced,” a Hyundai Motor Co. announced.

In addition to continuing the construction of plants in Brazil and China, Hyundai chairman Chung Mong-koo is also reported to have called for a efforts in Europe and the U.S. to be stepped up in order to take the group’s carmakers a step further in advanced markets.