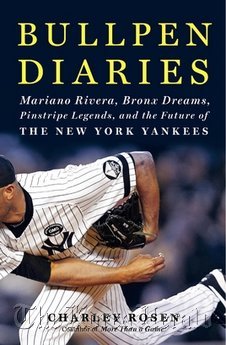 Forgive New York Yankees fans if they get nervous when one of the team’s relievers takes the mound. The 41-year-old lights-out closer, Mariano Rivera, appears to defy time with every cutter he throws for a strike. Fireballer Joba Chamberlain is young, naturally gifted and inconsistent. And the rest of the bullpen has been a mixed bag over the last couple of years.

This is not one of those exhaustively reported, intimate narratives that provide insights into the players across the ups and downs of a long season. And it’s not exactly a behind-the-scenes expose. While Rosen peppers the book with anecdotes and interviews, the bulk of it is a game-by-game recap of the bullpen’s performances with Rosen‘s brief analyses and letter grades for each relief performance. Rosen focuses more on the pitchers’ mechanics than their personalities.

The approach can be enlightening. Rosen gives a good sense of what scouts see when they assess pitchers and how former Yankees pitching coach Dave Eiland would tweak his relievers’ deliveries to give them better command. But reading the game-by-game reports over the course of a long season can get repetitive. How many times do you want to read about a poorly located fastball?

And absent a compelling narrative drive, the book can read like yesterday’s news. A few examples: Eiland was fired last October, pitcher Kerry Wood has moved on from the Yankees and Alfredo Aceves now takes the mound in a Red Sox uniform. Rosen’s game-by-game analysis might have worked better as a blog posted as the season progressed.

Rosen is a veteran author with experience as a basketball coach, including a long-ago stint as a minor-league assistant to his buddy Phil Jackson. He’s an interesting guy, and the best bits of the book are when Rosen writes first-person about visiting the Yankees’ Triple-A team in Scranton, or his Yankee-loving youth in the Bronx. He’s the sort of guy who gets excited about getting Don Larsen’s autograph as a grown man, and can write engagingly about the encounter.

Rosen has a nice voice. But to put it in pitching terms, the mechanics of this book are a little bit off. (AP)

The Summer Without Men
by Siri Hustvedt:
(Picador, $14) 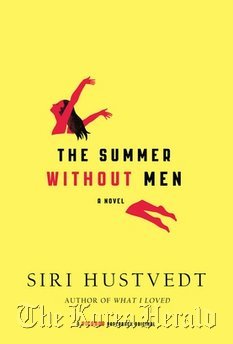 Mia Fredricksen, the poet narrator of “The Summer Without Men,” has moved back to the town where she grew up after her husband, Boris, announces he wants to put their 30-year marriage on “pause.” He is having an affair with a woman 20 years younger than Mia. The shock of his announcement precipitates a nervous breakdown, and the novel — the fifth by the talented writer Siri Hustvedt — recounts how she knits herself back together during a sultry Minnesota summer. Central to her recovery are her elderly mother, her mother’s friends, a young mother next door with two small children, and the teenage girls in a poetry class who remind her of her own painful youth.

Although a psychotic break might seem like an extreme reaction, Mia is exceptional in almost every way. She senses an invisible presence on the other side of her front door; if she hears a metaphor such as “two peas in a pod,” she sees the round, green vegetable. At one point, her mother tells her, “I always thought you felt too much, that you were overly sensitive, a princess on the pea.”

Despite her fragile state of mind at the beginning of the novel, Mia, whose name can also spell “I am,” should not be underestimated. Her voracious reading of literature, philosophy and science — and favorite excerpts are sprinkled throughout — has led her to a hard-won equanimity. She is also blessed with empathy, irony and a healthy dose of feminist outrage at the way women’s minds and bodies are routinely devalued. These qualities, combined with an almost surreal sensitivity to her environment, lead to an oddly satisfying conclusion in which love and sanity prevail.

Hustvedt, who has suffered from migraines and their associated sensory disturbances since childhood, is the author of “The Shaking Woman or A History of My Nerves,” a memoir about a seizure disorder she developed in 2004. Her recent interest in brain science shows up here — Boris and his paramour are both neuroscientists — but ultimately the story belongs to poet Mia, with her fanciful imagination, razor-sharp observations and captivating way with words.

Although Hustvedt’s self-conscious narrative devices, including directly addressing the reader, may at times make you wish she would just tell the story, her finely wrought descriptions of everything from maternal love to mean girls and marital sex make this slim volume well worth reading. (AP)

A Bittersweet Season: Caring for Our Aging Parents — and Ourselves
by Jane Gross
(Knopf, $26.95) 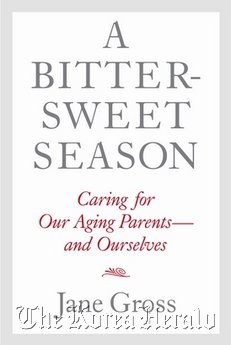 Decades after screen star Bette Davis famously declared that “growing old is not for sissies,” Estelle Gross expanded on the woes of the ailing aged with her lament that people live too long and die too slowly.

On the day after the Sept. 11 attacks, after helping cover that story for The New York Times, an exhausted Jane Gross was finally able to drop by the nursing home a few miles north of ground zero where her mother had just moved to what would be her final residence. In a furious maternal vent, she greeted her daughter by saying, “I wish those planes had hit this building.”

Gross was a feisty octogenarian with a grab bag of chronic conditions that for nearly three years forced her to rely on others to carry out the simplest of daily activities. On the other hand, her cognitive abilities remained sharp until the end, a contrast to many others in her nursing home who endured the ravages of Alzheimer’s disease and other types of dementia.

Gross’ ordeal, and that of her daughter as principal caregiver, is one that is becoming more widespread as baby boomers are compelled to reverse the roles of their childhood and take on the challenging task of becoming their parents’ parents.

In her book, “A Bittersweet Season: Caring for Our Aging Parents and Ourselves,” Gross, who went on to launch a blog called The New Old Age, recounts her own experiences in shepherding her mother through the intricacies and indignities of long-term care.

The narrative begins in 2000 with Estelle Gross’ move from Florida to New York, a “reverse migration” that is becoming more common for parents who need chronic care. It ends in 2003, when she dies at 88 in a nursing home after a decline that left her paralyzed, incontinent, unable to speak and unable to eat on her own.

An incisive reporter with a fine eye for detail, Gross laces her account of her mother’s decline and its impact on her own life with suggestions and warnings for other caregivers who find themselves in similar situations: Avoid the chaos of hospital emergency rooms, assume that costs associated with long-term care are not reimbursable by Medicare, find a family doctor, internist or — best of all — a geriatrician to manage the inevitable cascade of medical problems.

Gross recounts a succession of middle-of-the-night phone calls, emergency summonses from the workplace, financial costs that swiftly escalate and the need to play social engineer to ensure that nursing home staff aren’t slacking off when the need arises to change diapers or prevent bed sores.

“Once a parent has passed eighty-five, easy and affordable passings are few and far between. Believing you’re going to get one is magical thinking,” she writes.

The book is written from the perspective of the caregiver — more often a daughter than a son — whose relationship with the parent can be fraught with decades of resentment and other family baggage. In the author’s case, however, the ordeal brought her closer to her mother.

The path isn’t smooth, but rather an all-consuming and emotional roller coaster ride that Gross describes as “living in a soup of fear, guilt, heartbreak, resentment, loneliness, and exhaustion from bearing the weight of so much responsibility.”

While Gross’ memoir outlines the end-of-life decisions that often confront health care providers, clergy and ethicists, her mother’s ability to think rationally until the end gave her the control that others must often surrender. Instead, she exits on her own terms, without sentiment or self-pity.

“A Bittersweet Season” is sure to become required reading for anyone with an elderly parent who depends on long-term care. It’s also a worthwhile read for anyone who is interested in America’s health care system as it braces for the demands posed by demographic changes that include a sharp rise in the group now termed the “old old.”

Of course, the time to read the book is before the crises begin to mount, to be better prepared to make wise decisions and deal with whatever arises.(AP)